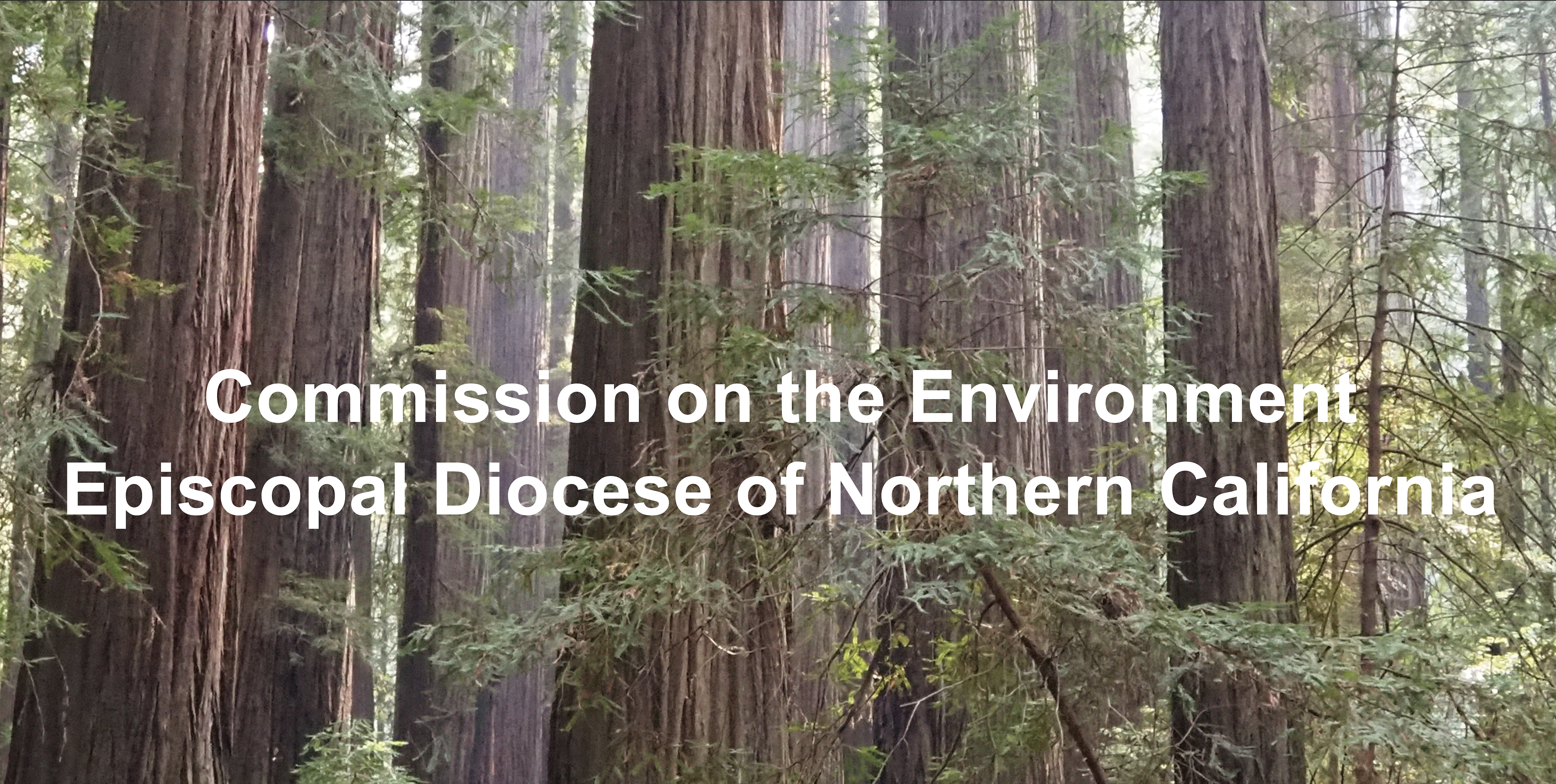 Commission on the Environment

The Northern California Diocese is beginning a new focus on our precious planet with the formation of a Commission on the Environment.

Church leaders voted to form the commission at the 2019 Diocesan Convention. After a delayed start, the commission now meets monthly and is beginning to shape practices to help individual churches do more for the environment, both in their own communities and globally.

The resolution forming the commission recognizes that, in many ways, our lifestyles have had a damaging impact on our environment and the habitats we share with other creatures. Presiding Bishop Michael Curry has called on Episcopalians to “love God’s Creation” as God loves the world.

The new Commission on the Environment aims to help take us down this path. We will not issue edicts to churches. Rather, we will become a resource hub. Many churches in the diocese are already engaged in a variety of great environmental efforts, from producing their own solar power to including vegan options at coffee service. Many of these efforts link congregations with neighbors while reducing a church’s environmental footprint.

Numerous General Convention resolutions have called on Episcopalians to heal our planet from threats such as climate change and habitat destruction. They’ve encouraged practices such as energy and water efficiency, and sourcing locally grown food. The commission will examine these resolutions to identify projects for local churches. We will also highlight successful work, connect churches with project experts, and share best practices with those who wish to do more.

Our place in God’s Creation is inexorably linked with that of our neighbors. The Commission on the Environment acknowledges our interdependence with all life, and encourages us to collaborate for a better world. Working together with faith and determination, we may be able to heal some of the damage that’s been done.

The Commission meets by zoom on the first Thursday of the month, at 1 pm. To participate or learn more, please contact Miriam Casey at mlcasey7@yahoo.com. 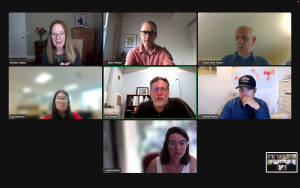 When church leaders meet in Redding on Oct. 21-22 for the Diocesan Convention, they will be asked to consider adopting a resolution dealing with nothing less than the fate of our planet: A climate change resolution.

The resolution calls on individual Episcopal churches and other diocesan organizations to strive for carbon-neutral status in their operations by 2030. It sounds like a lot to ask, especially for small churches with limited resources. But the resolution has been carefully crafted to ensure success.

Climate change is caused by carbon dioxide emissions from fossil fuels used by industry and transportation. This additional carbon dioxide in the atmosphere is boosting average global temperatures to historically unprecedented levels. This is already harming plants, animals and human communities, and causing numerous disasters caused by unusual weather events.

Presiding Bishop Michael Curry has called on churches to reduce carbon emissions in everything from the food they serve to the electricity they consume.

In addition, at the General Convention in July 2022, Episcopal leaders adopted Resolution A087, calling on the church to achieve net carbon neutrality in its operations by 2030, and urging individual churches and congregations to do the same.

Also, the church has laid out a detailed Covenant for the Care of Creation. It’s a program to adopt loving and life-giving relationships with all aspects of God’s Creation, from the air we breathe to the animals that the Bible calls upon us to protect.

What will the resolution do?

The proposed resolution states that, by Dec. 31, 2024, each congregation and Diocesan organization shall present to its vestry or equivalent governing body a facility assessment to identify actions enabling its operations to become carbon neutral by 2030.

What is carbon neutral?

Carbon neutral means that emissions associated with operating a church are offset by actions to absorb emissions. No church can be totally emission-free. So first we must assess how much carbon dioxide we are emitting. Then we identify ways to reduce them. For instance, through simple energy conservation measures or by adopting alternative energy sources like wind and solar. Finally, we must take action to absorb emissions from the atmosphere equal to the amount we require to operate. Planting trees is one simple way to do this.

How can churches do all this?

The resolution requires the Diocesan Commission on the Environment to help churches meet the 2030 goal. It will do so by sharing resources and successful examples, and pointing church leaders to experts who can help. It will also identify financial resources that may help churches adopt carbon-neutral practices.

Yes, it’s a tall order. But as catastrophic fire, drought and flood rock our congregations, we are realizing that managing climate change is one of the most important challenges of our time. Each of us as individuals have a responsibility to do our part. One way we can do that is by managing the operation of our churches.

Frequently Asked Questions about the resolution

A net-zero facility does not emit carbon at all, such as a facility that runs entirely on solar power. Net-zero facilities do not use fossil fuels and do not require an offset.

The Commission on the Environment will:

Congregations are not required to implement the plans by 2030; however, the General Convention adopted Resolution A087, Net Carbon Neutrality by 2030, commits the Church to a goal of net carbon neutrality in its operations and the work of staff, standing commissions, and interim bodies. The proposed effort by individual congregations is intended to support the Church’s resolution to achieve carbon neutrality by 2030.

No.  Solar panels are one option/tool for achieving carbon neutrality.

The purpose of the facility needs assessment is to explore opportunities to reduce, offset, or eliminate carbon emissions to achieve carbon neutrality. Recognizing challenges such as historical landmark status or structural limitations is part of that process.  Potential options should not be limited to on-site solar production.

Carbon neutrality is not confined to facility operation, but extends to congregational processes and behaviors.  For example, congregations may choose to conduct meetings using Zoom or other technology to reduce the expenditure of fossil fuels associated with travel to and from committee meetings or other events.  Congregations may wish to reconsider who they purchase energy from and choose to purchase energy from only a clean energy provider.  The purpose of the facility needs assessment is to consider the many ways in which the use of fossil fuels can be reduced, offset, or eliminated.

The process of installing solar panels on a church can be a little bit intimidating. The Diocesan Commission on the Environment is working with one church, St. Luke’s Episcopal in Woodland, in hopes of making the process a little more manageable.

St. Luke’s recently began investigating solar power primarily as a means to reduce its electricity bill, said Rev. Alex Leach, priest-in-charge at the church. This past summer, the bill for power at the church surpassed $2,000 per month, mainly driven by air conditioning. One large church building in particular is difficult to air condition efficiently. Known as the Great Hall, it was built in an old style with open-beam ceilings that lack any insulation from the broiling Sacramento Valley sun.

Kevin Hawkins, senior warden at the church, presented his vestry with an idea: Invest in solar panels so the church can generate its own power. With a half-dozen buildings on the church campus, there’s plenty of roof space for photovoltaic panels. The panels, in turn, would shade those roofs to help keep buildings cool.

Leach contacted the Commission on the Environment, which put him in touch with one of its members, Daniel Moyer, who happens to work in the solar industry.

“We had a good conversation with Daniel,” says Leach. “It was very helpful in learning about some of the process.”

Moyer used a free software program called Open Solar to estimate the solar potential at the St. Luke’s campus. It creates a three-dimensional model of the property to assess sun exposure and potential mounting locations for solar panels, then develop a rough cost estimate.

“But if they spend $2,000 a month on electricity now, it doesn’t take but a few years to pay off a $100,000 solar system,” said Moyer, who chairs the Creation Care Ministry at St. Alban’s Church in Arcata.

There are also rebates available that could cut $30,000 off the initial cost.

Other installation models might make sense. For instance, the Commission on the Environment is investigating a program started by the Diocese of San Joaquin to outfit all its churches with solar power and get the diocese off fossil fuel-generated electricity altogether.

Already, solar installations at six of the 22 churches in the diocese are generating about half of all the electricity needed by the diocese, and more installations are planned. If successful, San Joaquin could become the first Episcopal diocese 100 percent powered by solar. And yet it aims to go even further: It plans to work with other diocese within the Episcopal Church to help them adopt solar using the same model.

Meanwhile, St. Luke’s in Woodland is reaching out to solar contractors to get detailed cost estimates for its own installation, which will guide the final decision-making process. Moyer plans to help the church review those estimates.

“Some of the latest thinking has been to do it in stages over several years,” Leach said. “It would be a huge benefit. I fully agree with the environmental sustainability of it.”

Do you know a young person concerned about climate change and ready to raise their voice to support meaningful climate action? The Commission on the Environment is seeking a young person (aged 30 or younger) to join our team at the upcoming Diocesan convention, Oct. 21-22 in Redding. We are championing a Climate Action Resolution that will be voted on by the delegates at the convention and we want to do all we can to ensure its passage. We value youth leadership and are seeking a young person to help:

We welcome your ideas and participation!  A stipend is available to support travel costs. Please contact Miriam Casey (mlcasey7@yahoo.com)  if you are interested.

The Episcopal Church has made a major commitment to Creation Care.  Please click on this link to visit their webpage.  https://www.episcopalchurch.org/ministries/creation-care/ 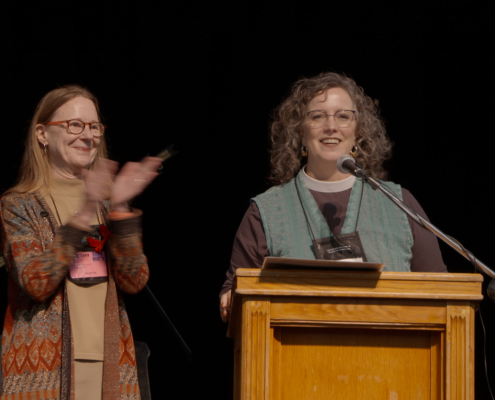 Every donation goes toward our mission and ministries.

Making Disciples, raising up saints, and transforming communities for Christ.

Give
Scroll to top